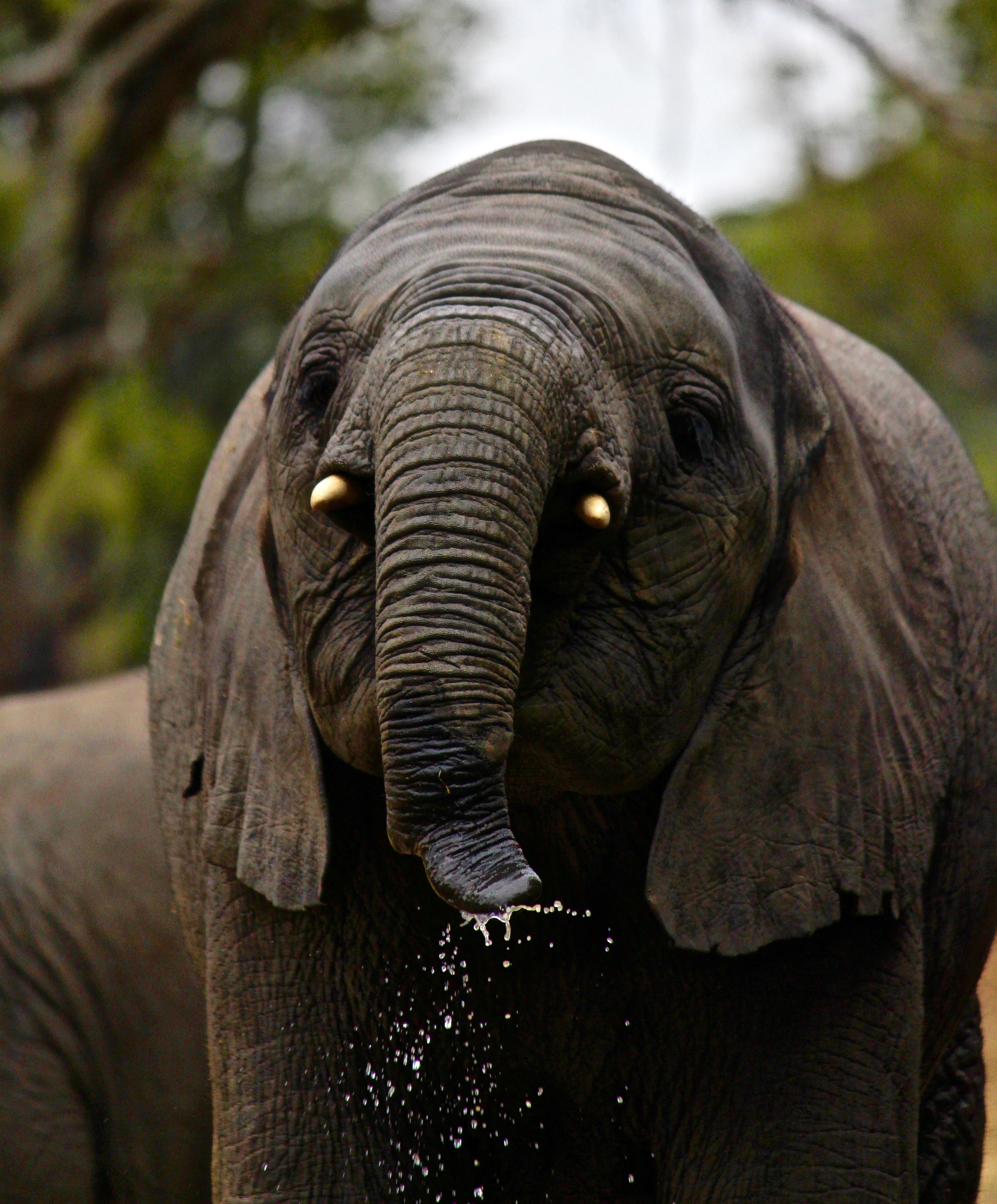 Annabelle is one of five elephant orphans who found a new home at the Zimbabwe Elephant Nursery (ZEN). ZEN is currently based at Wild is Life. Wild is Life is an established rescue center and sanctuary for orphaned, abandoned and injured wildlife in Harare, founded by Roxy Danckwerts 18 years ago. ZEN was founded in February 2014 after orphaned elephant baby Moyo was rescued. Moyo was found alone without her herd. On her arrival Moyo weighed only 56kg, so it is assumed that she was a premature baby and it’s possible that this was the reason she couldn’t keep up with the herd. But Moyo has a fighting spirit and she survived and with Moyo’s arrival the Zimbabwe Elephant Nursery was founded, the only recognised and legal elephant nursery in Zimbabwe.

Annabelle was part of a group of 3 elephants (Annabelle, Matabele and Kukurukura) who was given to ZEN in July 2015 for rehabilitaion and eventual release by Zimbabwe Parks and Wildlife Management Authority (ZimParks). These 3 elephants had a very traumatic experience before they arrived at ZEN. They all sustained severe injuries prior to their arrival at ZEN. Annabelle was around 3 years old on arrival and she is missing a signifcant portion of her trunk. This renders her unable to fulfil certain tasks such as feeding and foraging. She is also missing her tail. It is assumed that that these injuries were caused by a lion attack, when she was a baby. Though she has had a traumatic experience and most like suffers from Post traumatic stress disorder she has made a very good recovery and is now a very happy elephant girl. She is a very intelligent and curious and her nickname is „the Negotiator“, because as the oldest female she has taken over the role as a mini matriarch. Even she is still a toddler, Annabelle is watching over her little herd, ensuring that Sizi and Moyo do not wander too far, that Matabele and Kura do not hurt eachother and that the keepers are close by to protect them all.

In April Annabelle has had a large growth on her face that has been increasing in size at a rapid rate. So the decision was made to remove the growth, although wild animals are always risky subjects of anaesthesia and the complications with thick elephant skin are numerous. Dr Mark Lombard, the ZEN veterinarian, researched and prepared well for this surgery. The immobilisation went perfectly and Annabelle very calmly sank to her knees and went to sleep. The team leapt into action. During surgery the respiration was vigorously monitored, along with heart rate, temperature and depth of consciousness. The other elephants were in their stalls and were calm, but curious. The careful excision took approximately 40 minutes and a tumour the size of an orange was cleanly removed.

The wound was sutured and the anesthesia was reversed, although it took Annabelle quite some time to wake up. Her caring keepers walked her slowly back to her stall, where she was greeted with deep, vigorous rumbles by the other elephants. They smothered her in trunks, talking all the while. It was tremendously humbling to watch how they cared so deeply about their matriarch. The tension was palpable at this stage, so the herd was left alone, to quietly reassure Annabelle that all was okay again.

The excised tumour has been sent for histology. The result was shattering, because Annabelle’s tumour was malignant. The histology was also examined by a Microbiologist who specialises in infant oncology in the US. He confirmed the diagnosis as myxo fibrosarcoma. This is a very rare, yet aggressive metastatic form of cancer.

In July another tumour had to remove from Annabelle’s trunk. This is very alarming as the new tumour had grown aggressively and reached this size after only one week:

The tumour was interfering in Annabelle’s ability to eat, because her trunk is already disabled from a past injury caused by a lion.

On the advice of international veterinarians and microbiologists, the tumour was surgically removed and the periphery of the excision was frozen with liquid nitrogen. Multiple samples of the tumour, as well as surrounding tissue, have been taken and have been examined by the veterinary pathology laboratory. These samples will further be examined by international veterinary oncology specialists. In addition, genome sequencing will be done to establish her genetic disposition to disease.

The initial diagnosis confirmed that the cells are the same as those of the first tumour and that we are possibly dealing with myxo fibrosarcoma. It is said that elephants rarely get cancer and it is extremely unfortunate that Annabelle, with all her existing problems, now has to face this form of disease.

This is an incredibly difficult situation for the entire ZEN team. There is very little known about cancer in elephants and much of the information is extrapolated from other species.

Annabelle recovered well from the anaesthesia and she is cheerful as always.

We from „Rettet die Elefanten Afrikas“ („Save the Elephants of Africa“) beared the costs fort he vet. If you want to help Annabelle and wish to support the Zimbabwe Elephant Nursery for Annabelle’s further veterinary treatments, you can donate for ZEN.

For the second surgery alone the following costs are incurred:

The entire ZEN team would like to thank you sincerely for every support!