(London – February 21st, 2011) – Elephant poaching continues to spiral out of control in Chad. Twenty elephants have been killed in just over the last two weeks for their ivory and there are concerns that more carcasses may yet be found.

All have been killed outside of protected areas, where they are vulnerable targets. The reports come from StÃ©phanie Vergniault, President of SOS Elephants of Chad. The International Fund for Animal Welfare (IFAW – www.ifaw.org) condemns violence against humans and animals and calls on the European Union to take action to support African countries like Chad which are asking for help to save these endangered animals.

BRAZZAVILLE â€” Officials in Congo were on Sunday holding a Chinese national as he tried to smuggle 10 kilos (22 pounds) of ivory — including five large elephant tusks — out of Congo, a wildlife group said.

The 35-year old was arrested Saturday at Maya-Maya airport, in the capital Brazzaville, said Naftali Honig, coordinator of the Project to Apply the Law on Fauna (PALF).

He was taking a flight bound for Beijing.

The Congolese paramilitary gendarmerie are holding the suspect, who faces up to five years in prison if convicted of the attempt to smuggle the wildlife artefacts.

"We vowed to help the government of Congo send a zero tolerance message to ivory traffickers, and as you can see this message is in action," said Honig.

On that occasion, officials seized 13 heads and 32 hands of apes, 12 panther hides, a lion hide, five elephant tails and numerous hides of other less endangered species, according to another wildlife group there.

It was the biggest ever seizure conducted in Africa concerning apes, according to Gabon’s AALF, known by its French acronym for Support for the Application of the Wildlife Act. 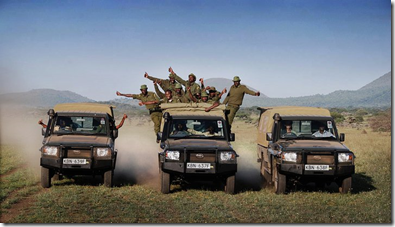 For twenty years, one poacher and his gang in Tanzania have been systematically poaching many of the Amboseli region’s elephants. The authorities have never been able to catch him. But thanks to Big Life & KWS, his poaching days are now over:
Seven weeks ago, I reported a continued escalation in poaching, another eight elephants killed in the Amboseli area alone in just 16 days. This included the old bull called Magna, whose broken tusks were so small, it showed that no elephant was safe from the poachers‘ bullets and poison.
Based on a tip-off from one of Big Life’s informers, Kenya Wildlife Service successfully intercepted the poaching gang responsible for the killing of Magna and many other elephants in the Amboseli ecosystem and Tanzania over the last twenty years. A firefight had ensued, during which two of the poachers were killed, but the leader of the poaching gang escaped with wounds over the border back into Tanzania.
The Kenyan authorities were not able to communicate as quickly as necessary with the authorities in Tanzania. At this point, Big Life’s strategy – of coordinated teamwork between our teams in Kenya and Tanzania – came into play. The Big Life team in Tanzania WAS able to respond, and immediately:
Critical information from one of Big Life’s informers in Kenya was passed on to the team in Tanzania from Honeyguide Foundation, our partner there. They were able to track down the gang leader, and with the help our network of informers there, followed him for a number of days. At the appropriate, safe moment, the Big Life/Honeyguide team brought in the Tanzanian police, who made the arrest. The gang leader now awaits extradition to Kenya, where he should receive a long prison sentence.
This poacher and his gang have been organizing and killing elephants for TWENTY YEARS, including what must be many of the elephants photographed in my books. But the authorities were never able to pin anything on him. Within three months of being established, Big Life has succeeded in breaking up the worst of the three main poaching gangs operating along the Amboseli region Kenya/Tanzania border.
This great success could not have been possible without the generosity of our donors who helped us purchase critical vehicles and equipment, hire anti-poaching teams, and develop our network of informers and associates.
Things are also going well with the capture of other poachers: In both Kenya and Tanzania in recent separate incidents, several poachers with newly-killed giraffe meat were arrested by Big Life rangers on night patrols.
As a result of Big Life’s efforts, there have been ZERO reports of any elephants being killed on either the Kenyan or Tanzanian sides of the border in the last six weeks. We have quickly sent out a strong, effective message to poachers that killing wildlife now carries a much greater risk of being arrested.
Of course, Big Life has invested a large amount of money establishing its teams in order to make a difference fast. We have achieved that goal, and we know our work is having an impact. However,there are still over two million acres to protect in the Amboseli ecosystem, and we have a long way to go financially to achieve SUSTAINABLE operations in both countries across this area.
To achieve our mission, Big Life must build and man a significant number of additional anti-poaching camps, with accompanying patrol vehicles and equipment. Our goal is a total of 160 rangers and scouts in 18 camps across the ecosystem. We are about halfway to that goal, and can get there with your help.
We’re not just attempting to protect the elephants, but also the diminishing populations of lions, giraffes, zebra and other plains animals also being hunted by the poachers. We may have brought down the most active of the three gangs operating along the Kenya-Tanzanian border of Amboseli, but there are the other two known gangs there, and all the other poachers operating in the other areas of this vast region. While the demand for ivory and all the other animal parts remain, there will be many who cannot resist the fast, easy profits to be made out of killing these irreplaceable creatures. With your help, we will be there to stop them, and allow the animals to flourish in peace once again.

A Chinese man was sentenced Wednesday by a Kenyan court to eight months in prison or a fine of around 600 dollars (440 euros) for illegal possession of 65 kilos (143 pounds) of ivory.

Wang Zheng, 29, was also convicted of failing to inform the Kenya Wildlife Service (KWS) of his cargo when he was arrested at Nairobi airport on Monday night and of dealing in game trophies without a licence.

Wang on Tuesday admitted to illegal possession of 12 tusks and 278 pieces of carved ivory he valued at 4,300 dollars (3,200 euros) when he was arrested on arrival from Democratic Republic of Congo.

KWS earlier said that Wang tried to offer a 200-dollar bribe to its officers when he was arrested.

The illegal trade in ivory from African elephants is driven by Asian and Middle Eastern demand for the tusks used in traditional medicines and ornaments. 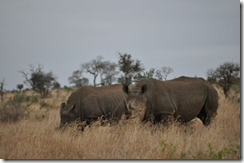 Lieutenant Colonel Lesego Metsi said a 33-year-old man briefly appeared before the Ga-Rankuwa Magistrate’s Court on Wednesday after he led police to two rhinos who were poached from Borakalalo Game Lodge.

"The man who is suspected not to be working alone appeared briefly before the Ga-Rankuwa Magistrate’s Court today, the case has been postponed until January 24," Metsi said in a statement.

In another case two men appeared in the Rustenburg Magistrate’s Court on Tuesday after they were found in possession of elephant tusks at Mogwase Shopping Complex.

"The two aged 30 appeared briefly before the Rustenburg Magistrate’s Court and their case has been postponed until January 27 for further investigation and legal representation."

Metsi said police received information on Saturday that the two suspects from Moruleng Village were looking for a prospective buyer of an elephant tusk or ivory.

"The suspects were spotted around the Mogwase Shopping Complex waiting for that prospective buyer who was coming from Mozambique. After the alleged buyer did not arrive the members of the Hawks from Rustenburg pounced on them."

Metsi reminded the public to report any emergency crime situation to 08600-10111 or visit their nearby police station to report any suspicious criminal activities.